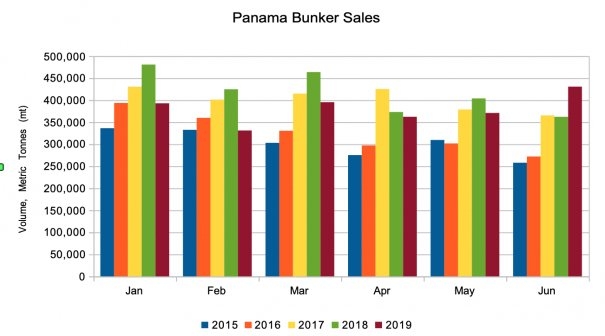 After a period of relatively subdued bunker sales in Panama, volumes in June hit a 15-month high of 430,583 mt, according to the latest data from the Panama Maritime Authority (AMP).

The performance marks a turnaround for the country's 2019 marine fuel sales in more ways than one; it is not only the highest sales total of the year but the first month to record a year-over-year improvement on 2018. The June total was almost 19% higher than the 362,142 mt sold in June 2018.

June's rise looks to be entirely due to a significant increase in the number of vessels calling at the country's key ports of Cristobal and Balboa; the average stem size for the month of 744 mt was slightly lower than the year-to-date average of 758 mt, but with the 579 vessels calling for bunkers was the highest in a month since March last year.