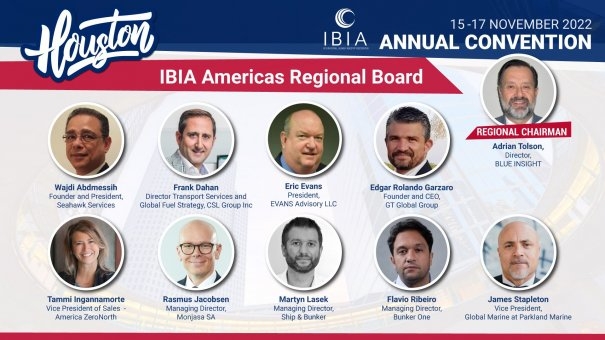 Several of the new board members will be participating and speaking at the IBIA Annual Convention 2022 later this month. Image Credit: IBIA

Bunker industry body IBIA has announced the members of its new IBIA Americas Regional Board.

The body has ten members and is the organisation's third regional board after the ones established for Asia and Africa, IBIA said in a LinkedIn post on Monday.

The board members are as follows:

"The bunkering industry is challenged by many issues, not the least of which is the energy transition we will all soon embrace, Regional Chairman Adrian Tolson said in the post.

"IBIA is at the forefront of these discussions and recognizes the need for global as well as regional solutions.

"The new Americas Regional Board will play a key role in both explaining these issues to local members and ensuring their voice is heard."

Several of the new board members will be participating and speaking at the IBIA Annual Convention 2022 later this month. The convention will be held at the JW Marriott Houston hotel on November 15-17. The event will start with a welcome reception followed by a series of keynote speeches, presentations, panel sessions and networking opportunities over the following two days.

Two Hires for Dan-Bunkering in Dubai

The firm's scrubber-equipped pool expanded to 34 vessels by the end of 2022 from 19 a year earlier.

Analysts also debated where oil is heading in 2023.