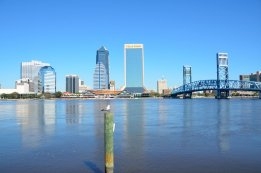 The US East Coast port of Jacksonville has chalked up another bunkering first with a ship-to-ship transfer of liquified natural gas bunker fuel to a foreign-flagged vessel.

Jax LNG and Tote Services undertook the refuelling with the latter's bunker barge, Clean Jacksonville, supplying the gas to car carrier Siem Confucius at the port's Blount Island marine terminal, according to the American Journal of Transport.

Tote has previously bunkered many of its own gas-powered box ships while the first foreign-flagged vessel to load LNG bunkers at Jacksonville did so at berth in September.

"Jacksonville is a global leader in the use of LNG and we are proud to support the continued growth of LNG in the maritime industry and beyond," Jaxport chief executive Eric Green was quoted as saying.

LNG has been steadily gaining ground in the marine space as an acceptable alternative to conventional, oil-derived bunker fuel.

The firm posted first-quarter bunker consumption of 2.7 million mt in a results statement on Wednesday, up from 2.5 million mt in the same period of 2020.