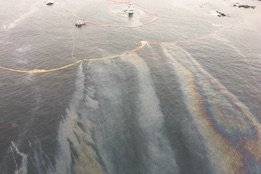 A report released Thursday by Canada's Heiltsuk Nation has criticised Canadian authorities and Kirby Corporation (Kirby) over the response to a fuel spill last year following the sinking of Nathan E. Stewart.

In the 75-page report, the Heiltsuk Tribal Council says its investigation into the first 48 hours following the October 13, 2016 spill of some 110,000 litres of diesel in British Columbia's Gale Passage "exposes failures in Canada’s emergency response measures and repeated refusals by the Transportation Safety Board of Canada and Kirby Corporation to disclose information to the Heiltsuk about events unfolding in their territory in the heart of the Great Bear Rainforest."

As Ship & Bunker reported at the time, the tug and fuel barge DBL 55 were on their way back to Vancouver from Alaska at the time of the incident, and while the 287-foot fuel barge is noted to have been empty, the tug, which left Alaska with more than 50,000 gallons of diesel, began leaking fuel into the water.

Marilyn Slett, the Chief Councillor of the Heiltsuk Nation, said at the time that the response of the industry and government had been "wholly inadequate," adding that clean up efforts had been challenged by slow response times and not enough response vessels, appropriate equipment, or personnel.

The Heiltsuk were never consulted by Canada on whether we agreed with the Nathan E. Stewart transporting oil through our territories

The report, which is said to be based on information from first responders, the Canadian Coast Guard, and Unified Command, also further suggests there was a lack of safety instructions and gear for Heiltsuk first responders, who were exposed to the spill, as well as a lack of clarity around who was in charge of response in the early hours of the spill.

The report also documents failed attempts by the Heiltsuk to gain access and information from the Transportation Safety Board and Kirby for the vessel’s logbook, black box, crew statements, crew training records, barge history, and other information.

"The Heiltsuk were never consulted by Canada on whether we agreed with the Nathan E. Stewart transporting oil through our territories, or with its exemption from having a local pilot," said Slett.

"The way Canada handled this situation does not reflect the approach the federal government says it wants to take in developing a nation-to-nation relationship."

In October, it was reported that U.S.-based Kirby Offshore Marine had paid $250,000 to the Heiltsuk Nation in relation to the tug's grounding.

The CARB plans to start checking whether ships are burning low-sulfur residual fuels instead of distillates.

Bunker demand may drop by 5-7% overall this year, according to Star Bulk's bunker director.