What Does 'Zero Emissions From Shipping' Really Mean? 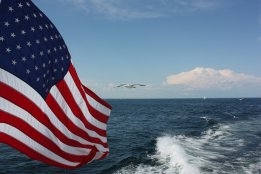 The US is aiming for a tougher decarbonisation target than the current one envisaged by the IMO. File Image / Pixabay

US Climate Envoy John Kerry's announcement of the Biden administration's new policy on shipping decarbonisation last month led to some confusion in the industry.

The announcement was mistakenly reported by news agencies at first as the US aiming for a 'net zero' emissions target for shipping by 2050. Several Ship & Bunker readers wrote in to say that this was incorrect, and that Kerry had actually called for 'zero emissions'.

For many in and around the shipping industry, the announcement came as a welcome change from the Trump administration's resistance to decarbonisation efforts at the IMO. But the transcript showing Kerry's wording about the target showed there was some further ambiguity around his words.

"In support of the global effort to keep within reach the 1.5 degree C limit on global average temperature increase—and in support of global efforts to achieve net zero greenhouse emissions no later than 2050—the United States is committing to work with countries in the International Maritime Organization to adopt a goal of achieving zero emissions from international shipping by 2050, and to adopt ambitious measures that will place the entire sector on a pathway to achieve this goal," Kerry said, announcing the new policy at an Ocean Conservancy event on April 20.

The ambiguity comes in determining the exact meaning of 'zero emissions'. A strict interpretation of this for marine shipping means just that: no emissions of any kind being produced by the vessel.

Taken this way it could mean the US intended for all forms of marine energy apart from battery, solar, wind and nuclear power to be banned; even the water produced when hydrogen is used as fuel could come under the category of emissions.

In contrast, 'net-zero emissions' would generally be considered to permit emissions from the vessel, including GHGs from burning the fossil fuels used today, as long as those emissions were 100% offset elsewhere via some other mechanism.

Zero life-cycle emissions is the goal.

That could still preclude a wide range of marine fuels being used beyond 2050, including oil, conventional and bio-LNG, other biofuels and even some synthetic fuels if they are produced using blue rather than green hydrogen.

A spokesperson for the US State Department confirmed to Ship & Bunker that their working definition of 'zero emissions' would be similar to that of the environmental groups.

"Yes, zero life-cycle emissions is the goal," the spokesperson said by email earlier this week, without giving further details.

Whether that will translate into the US targeting an outright ban on ships using fuels that fail to meet that standard remains to be seen. Announcing such a ban at this stage might be seen as counterproductive, in discouraging investment in the alternative fuels currently available to the market.

But until a further clarification of the rules are given, advocates of LNG and biofuels being used in the shipping industry may need to prepare themselves for increasing regulatory hostility from the US.

The company revealed the figure in an emailed statement on Thursday announcing its 150th LNG bunker operation with Shell for its gas-powered Aframax tankers.

To look at how sustainability reporting can be streamlined.