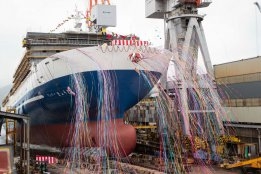 Mitsubishi Shipbuilding has held a launch ceremony for a new scrubber-fitted ferry set to commence operations in Japan later this year.

The Ferry Kyoto was built for Japan Railway Construction, Transport and Technology Agency and Meimon Ferry Company, Mitsubishi Shipbuilding said in a statement on its website on Thursday. The new ship is due to enter service in December and operate between Osaka and Shinmoji.

The ship has passenger capacity for up to 675 people, and will be the largest ship ever operated by Meimon ferry.

As well as being equipped with a scrubber system, the ship includes an air lubrication system and has fuel consumption about 35% lower than existing vessels, Mitsubishi said.

ScanOcean will make the product available ex-pipe at Södertälje from the end of this month, alongside its current offer of DMB MDO from Neste.

Monjasa is a signatory to the Gulf of Guinea Declaration, calling for further naval support in the region to combat piracy.

The company has signed a memorandum of understanding with Porto Central to build an ammonia production, storage and distribution facility there.