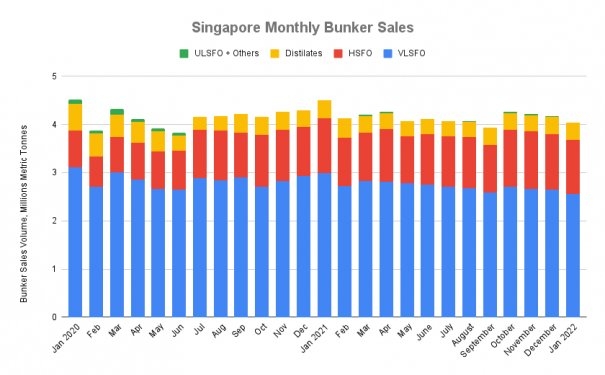 Bunker demand in Singapore, the world's largest marine fuels hub, declined on both a yearly and monthly basis in January to the lowest level since September.

The city-state's total demand slipped to 4 million mt in January, according to preliminary data from the Maritime and Port Authority, down by 10.4% from the same month a year earlier and by 3.5% from December's level.

The average stem size was about 1,295 mt last month.

Singapore's sales continue to show signs of cooling off after a strong autumn; the sales total has now declined for every month since October. October's total was a five-month high, and saw the biggest month-on-month improvement since July 2020.

There were 3,115 vessel calls for bunkers in January, 0.9% higher than the level seen a month earlier. That left the average stem size last month at about 1,295 mt, compared with the 12-month average of 1,272 mt. 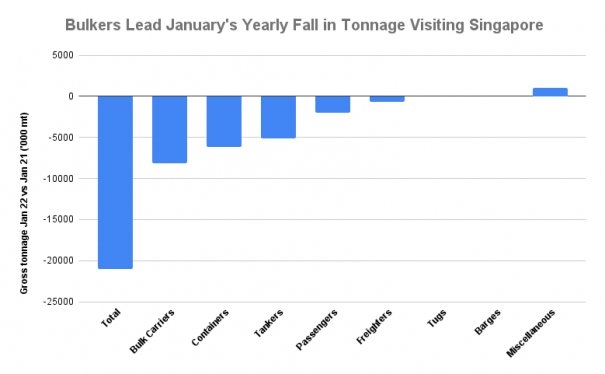 The total gross tonnage visiting Singapore dropped by 8.3% on the year to 234.6 million mt. This decline was led by the bulker segment, which lost 8.1 million mt, and by a 6.2 million mt drop in container tonnage.

The systems act as scrubbers removing sulfur and other emissions as well as capturing carbon dioxide.

The fuel is produced at the Porvoo refinery, with bio-feedstocks being used in conjunction with conventional fossil feedstocks for the refining process.