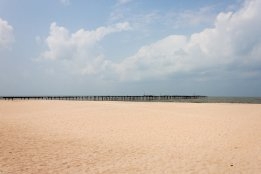 India's southern state of Kerala is to look at liquified natural gas as an alternative to diesel fuel for fishing vessels.

A pilot project is to go ahead with a vessel using LNG as its main source of propulsion.

The project will also involve the installation of an LNG fuel storage tank and other associated equipment and pipelines by modifying the boat hull, according to Reuters.

LNG is one of a range of alternative marine fuels to oil-derived fuel oil.

Due to a perceived lack of refuelling infrastructure, the fuel is more likey to be used by ships sailing between two, fixed points such as in a ferry service.

Northern Europe is considered to be a market where the bunker fuel alternative is most likely to take root.

Adopted for the high accuracy and efficiency: The time of tank sounding has been greatly shortened by about 75%.

Over the past two weeks the discount for very low sulfur fuel oil at Mumbai to Colombo's levels has widened by $21/mt, reaching $42/mt on Thursday, according to Ship & Bunker pricing.