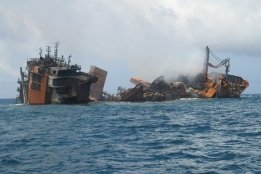 Fears of a bunker fuel spilll from the stricken box ship X-Press Pearl which is stranded off the Sri Lankan coastline have subsided.

The ship's operator, X-Press Feeders, reported no signs of a spill (as of Wednesday evening), according to local news provider The Colombo Gazette.

Pubished news reports using satellite pictures implied there was a spill.  But the company has confirmed no signs of debris and no confirmed reports of fuel oil pollution as of 6pm local time.

The patch visible in the images is likely to be from debris of oil from containers destroyed in an onboard fire, the report said.

The ship ran around following a fire last week.  While the ship's aft remains on the seabed at a depth of about 21 meteres, the vessel's forward section is afloat and stable.

The Thun Equality was built by Scheepswerf Ferus Smit in the Netherlands.