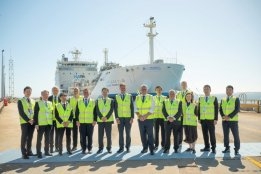 The future of hydrogen as a viable alternative marine fuel has moved a step closer to reality with liquefied hydrogen being transported by ship from Australia to Japan.

The trip made from the Port of Hastings to Kobe by liquified hydrogen transporter Suiso Frontier is being hailed as a milestone by the Hydrogen Energy Supply Chain (HESC) pilot project of which it is part.

The project's aim is for 225,000 metric tonnes of liquefied hydrogen to be produced during the its commercial phase. The hydrogen will come from carbon neutral production.

According to the HESC website, the project represents "the most advanced and scalable hydrogen project in Australia and the first project in the world to make, liquefy and transport liquid hydrogen by sea to an international market".

"Over the next two years, the project partners will undertake extensive research and development of the technical and operational requirements for a commercial-scale project," it added.

The company has signed a deal with Value Maritime to retrofit carbon capture systems on board the MR tankers Pacific Cobalt and Pacific Gold.

The total was dragged down on a monthly basis by HSFO sales after the contamination reported in Singapore in February and March.