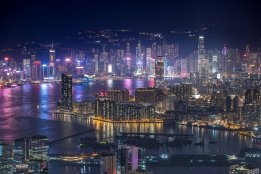 Bunker volumes in Hong Kong have dropped by as much as 70% since the start of the pandemic. File Image / Pixabay

The bunker industry in Hong Kong is seeking a government bailout to support it while COVID-19 lockdown measures continue to drive business away to rival ports.

Bunker volumes in Hong Kong have dropped by as much as 70% since the start of the pandemic, local broadcaster RTHK reported last week, citing comments made at a protest held by the bunker industry on Thursday.

In the third quarter of last year Hong Kong's bunker volumes were 47% lower than in the same period of 2019, according to Ship & Bunker's global market survey.

At the end of July Hong Kong's government announced that ships calling there for bunkers only would not be exempted from COVID-19 lockdown measures, and would need to be quarantined for 14 days before receiving their fuel. Most customers have proved unwilling to take on this delay, and have taken their business to competing ports in the region.

"People are not allowed to come in right now, but the ships are still going around the world," RTHK cited Frankie Yick, a member of Hong Kong's legislative council, as saying.

"So where do they go? They go to Taiwan, they go to Singapore for bunkering.

"We don't want them to leave Hong Kong as much as we can.

"Once they go, they find it could be even more convenient or it could be cheaper over there, so then they won't come back."

Hong Kong's bunker industry is asking for HK$32 million ($4.1 million) in support from the government while the quarantine remains in place, or HK$200,000 per bunker barge.

Oldendorff Plans to Use Wind Power on Dry Bulk Carrier

The project will fit vertical rotors to one of the company's Newcastlemax bulk carriers.

Tonhaugen argues that current p[rices are propped up by "artificial" supply cuts.

The barge is dedicated to the supply of 0.1% sulfur DMA MGO.