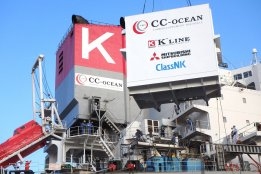 The firms have converted a carbon capture system designed for onshore power plants to work in a marine environment. Image Credit: Mitsubishi Shipbuilding

A group of Japanese companies has started tests of a carbon capture system on board a coal carrier.

Mitsubishi Shipbuilding, K Line and ClassNK have been working together on the project, Mitsubishi said in a statement on its website on Thursday.

The firms have converted a carbon capture system designed for onshore power plants to work in a marine environment, and installed it on board Tohoku Electric Power's bulker the Corona Utility.

"This is the world's first demonstration test to be conducted during actual ocean navigation," the company said in the statement.

"The knowledge gained will be used for future development of technologies and systems to capture CO2 from the exhaust gases of marine equipment and ships.

"Further, the captured CO2 can be recycled for use as raw material in synthetic fuel, providing a significant contribution to reductions in greenhouse gas (GHG) emissions."

Maersk is backing methanol over LNG bunkers in the alternative fuels race.

The company's year-to-date sales are more than 10% higher than in the same period of last year.