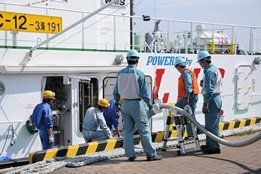 A joint venture by a quartet of Japanese firms today announced their first LNG bunkering operation in the Setouchi and Kyushu areas of Western Japan.

The supply took place in the Asano district, and was supplied ex-truck to the LNG-fuelled tugboat Sakigake, Japan's first LNG-fueled tugboat delivered in August 2015 and owned by NYK.

"Going forward, the four companies will utilize the experience gained from this operation to accelerate commercialization," they said.

Meanwhile, the 'back to normal' movement grows on several fronts.