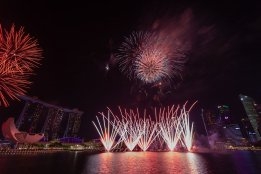 Bunker demand in Singapore rose for a second month both on a monthly and yearly basis in January despite an earlier Lunar New Year celebration this year and the outbreak of the coronavirus in China.

Total demand at the world's largest bunkering hub jumped by 7.5% on a yearly basis to 4.515 million mt in January, according to preliminary data from Singapore's Maritime and Port Authority (MPA), up from 4.199 million mt a year earlier and 4.466 million mt in December.

This was the highest monthly total since January 2018, and the first time the total has surpassed 4.5 million mt since then.

The rise in demand from last year will partly reflect the lower energy density of 0.5% sulfur bunker fuels compared with high sulfur fuel oil, meaning shipowners need to buy a higher volume of fuel to travel the same distance.