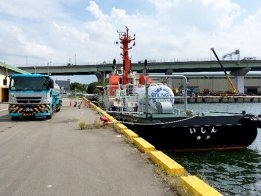 The bunker delivery was carried out by truck. Image Credit: MOL

The firm took on LNG for the tug Ishin from Osaka Gas and Daigas Energy Company at Osaka on September 1, it said in a statement on its website on Thursday. The emissions produced during the production, transportation and consumption of the fuel were covered by carbon offsets.

"The Ishin is MOL's first LNG-fuelled vessel, and the group continues its proactive push on new initiatives to reduce GHG emissions," the company said in the statement.

"MOL aims to promote the wider use of LNG-fuelled vessels while working to adopt new alternative fuels such as ammonia and conducting research and development on the use of synthetic methane, which is expected to contribute to further GHG reduction.

"It not only strives to reduce GHG emissions generated from its own operations, but also to meet the needs of customers and society to reduce the environmental impact of its activities."

The use of carbon offsets may be one way for the shipping industry to reduce its emissions in the period before zero-carbon fuels become more widely available. Some environmentalists tend to object to them as being a false substitute for taking more concrete action towards decarbonisation.

A queue of barges waiting to load at the terminal has built up because of staffing problems caused by the outbreak.

The company has hired Prasoon Nambiar as a junior bunker trader in its Dubai office.

The 190,000 DWT bulker will be equipped with Jotun's underwater robotic hull inspection and cleaning device, as well as its SeaQuantum Skate antifouling coating.