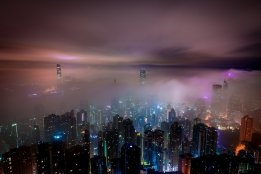 Sensor-equipped drones may be used in Hong Kong's harbour to monitor emissions from ships. Under the programme, sensors will 'sniff out' pollutants in the plume coming out of the ship's stack.

The practice, which is already in use in Danish waters, will coincide with the 0.5% limit on sulfur from bunker fuel which is in force for ships in Hong Kong waters.

The method has been devised by Dr Zhi Ning of Hong Kong's University of Science and Technology.

"With the new laws, we need to design a system to screen ship emissions that is quick, stable, accurate and able to provide scientific evidence. It also has to be compact and lightweight," Ning was quoted as saying by regional news provider South China Morning Post.

The device can detect substances up to 50 metres away from a vessel's funnel.

"It is a sophisticated system built into a very small, concentrated platform," according to Ning.

The environmental protection department will run prototype trials over Hong Kong waters next month with possible deployment by the end of the year.

The port authority allowed bunker operations to resume from 6pm on Friday.

As Korean and Chinese yards vie for a share of the nascent market.

For the managing director role the firm is looking for candidates with a proven track record in management within the bunker trading industry and a thorough understanding of market dynamics.