Incheon to Get its First Shore Power Solution 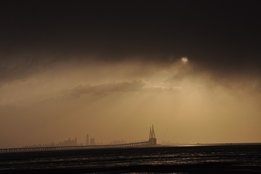 ABB says it has won the contract for the project after a pilot scheme for passenger ships to plug into the local grid received the go ahead from Incheon Port Authority (IPA).

"Given its metropolitan location and IPA's ambitions to develop its 'Golden Harbor' vision for Incheon as a new tourism hub for the Northeast Asia, environmental credentials rank highly in port priorities," said ABB.

With a growing public awareness of shipping's environmental footprint, ports are increasingly turning to shore power as a means to improve their green credentials.

indeed, this is ABB's second such announcement this week, after earlier reporting it is also supplying equipment for a new shore power facility in the Port of Marseille, France.

Hapag-Lloyd consumed a total of about 2 million mt of fuel in the first half of the year.

Sales at the UAE port halved between January and June, but rallied strongly in July, according to Glander International Bunkering.