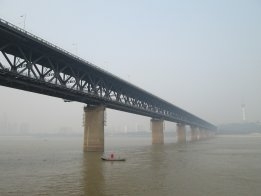 According to its website, Eve Energy started up in 2001, going on to list on the Shanghai GEM in 2009. Its focus is on lithium batteries.  SHS was formed this year.

China has gone to some lengths to restrict the impact of ship pollution on its mainland.

The country's coastline as well as the Yangtze river delta are already under the 0.5% sulfur cap on bunker fuel. That cap will be applied to shipping globally from the start of next year.