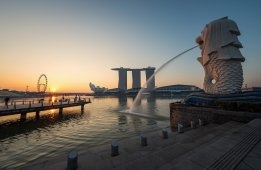 The suspension related to Singapore's HSFO contamination issues from February and March of this year. File Image / Pixabay

Global commodity trading firm Glencore has retaken its place on Singapore's list of licensed bunker suppliers after a two-month suspension.

The Maritime and Port Authority had suspended the licence of Glencore Singapore Pte Ltd to supply bunkers in the city-state's waters for two months from August. The MPA found that Glencore had continued to sell HSFO contaminated with chlorinated hydrocarbons for about a week after learning about the quality issue.

As Ship & Bunker reported last month, local market participants have reported that the firm's absence had little impact on the functioning of the Singapore market.

"They are still buying and selling bunkers in their capacity as a trader, it's just that they do not use their BDN," a market source told Ship & Bunker at the time.

"Once the licence is restored, Glencore can or will be delivering in their own capacity.

"That means those volumes that they were trading these past months to other physical suppliers will be taken back and delivered by themselves."

The MPA listed Glencore as Singapore's sixth-largest bunker supplier by volume in 2021. Singapore currently has a total of 42 licensed suppliers.