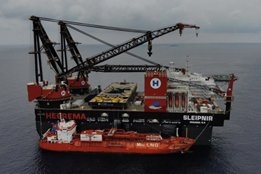 Titan LNG has completed what it has hailed as the largest LNG bunkering in the world so far, and with it marked another step towards the alternative fuel's acceptance as a mainstream marine fuel.

The LNG was delivered by the Coral Fraseri, the most recent addition of the Anthony Veder small scale LNG pool of vessels, with the gas coming from Singapore's Pavilion Gas.

“The business case for LNG-fuelled vessels remains very compelling and hurdles are coming down for the widespread adoption of this cleaner fuel,” Titan LNG said.

“The economics have worked out well for early adopters of LNG as a marine fuel, using ECA and IMO 2020 compliant fuel compared with the price of heavy fuel oil currently.”

The cost of the stem was not discussed, and while ex-wharf pricing of LNG is generally highly favourable compared to oil-based bunkers, the big question mark is over logistics costs which are considerably higher.

Singapore performed its first LNG bunkering in May.

The rule will just apply at berth and anchorage from September, but is due to be extended to cover all of South Korea's waters from January 1, 2022.