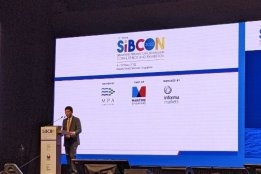 The authorities in Singapore, the world's largest bunkering hub, have developed a quality standard for biofuel bunker blends in an effort to support the shipping industry as it takes on these alternative fuels.

The new standard, WA 2:2022, was announced as part of the Sibcon industry event in Singapore on Wednesday.

"MPA, in consultation with relevant industry experts, has developed a provisional national standard on specifications of marine biofuel," the Maritime and Port Authority of Singapore said in a circular on Wednesday.

"This national standard has been developed under the purview of the Chemical Standards Committee (CSC), a committee under the Singapore Standards Council.

The MPA also encouraged the market to buy biofuels certified by the International Sustainability and Carbon Certification (ISSC).

A market source told Ship & Bunker that a concern that the ISO would take some time to develop such a specification may have prompted the move.

"In the interim, we have worked with industry, academia and other agencies to develop a national standard on the specifications of marine biofuels, which will be useful to bunker suppliers and buyers," Chee Hong Tat, Singapore's senior minister of state for finance and transport, said in the opening address at Sibcon on Wednesday.

"Standards may sound like a very technical, maybe sometimes rather boring area, but they are actually very important because they provide a common reference point that is accepted by all parties, and then that gives confidence when we transact.

"These are not things which are sometimes paid a lot of attention to, but they are actually very important.

To purchase the full set of standards, contact details are as follows:

MPA Reports No Spill From Grounded Tanker in Singapore Strait

The Djibouti-registered tanker Young Yong came aground off Takong Kecil in the Singapore Strait on the evening of October 26.

Low Teck Seng, senior vice president at the National University of Singapore, will take up the role of chairman from the start of next year.