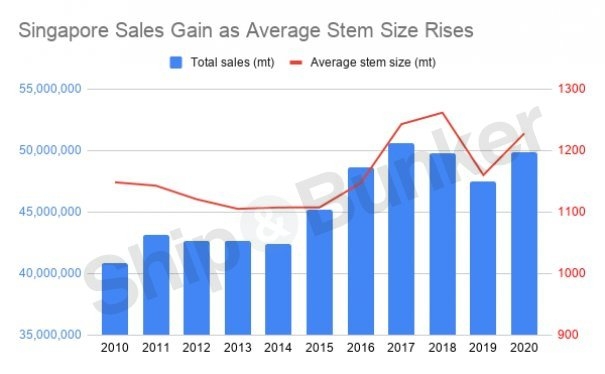 Annual bunker sales at the world's largest marine fuels hub came in just short of 50 million mt in 2020 as a small decline in December pared the city-state's biggest gain in four years.

Singapore's total demand dropped to 4.3 million mt in December, according to preliminary data from the Maritime and Port Authority (MPA), up by 0.6% from November's level but 3.9% lower than that seen in December 2019.

December's year-on-year decline will partly reflect an artificially high level at the end of 2019, when shipping companies were rushing to stock up on the new VLSFO blends before the 0.50% sulfur limit came into effect.

Singapore benefited from a consolidation of bunker demand at the larger hubs.

That left total 2020 demand at 49.8 million mt, 5% higher than 2019's levels despite an overall global market decline last year. The yearly gain was the biggest since 2016.

As the mandatory mass flow meters used to measure all bunker deliveries in Singapore come with a +/-0.5% margin of error -- still more accurate than the traditional systems used in any other port -- the volumes data for the year could have a variance of about 250,000 mt in either direction.

Only government licensed companies can supply bunkers in Singapore, and MPA calculates sales based on the BDNs of those companies.

Singapore benefited from a consolidation of bunker demand at the larger hubs last year at the expense of the smaller ports. This happened at first with the advent of IMO 2020 as shipowners had concerns over VLSFO availability at some ports, and then later during the instability of the markets disruption during the COVID-19 pandemic. 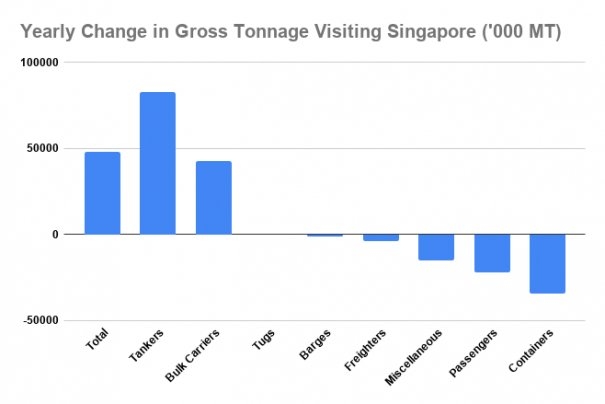 Rotterdam has also seen growth this year, with demand in the first three quarters of 2020 4% higher than in the same period of 2019.

That change in the size profile of ships seeking bunkers in Singapore will partly have stemmed from the pandemic's effect on the cruise industry. The gross tonnage of passenger vessels coming to the port plummeted by 41.1% on the year.

The challenge for Singapore will now be to grow its sales further at a time when the smaller ports will be vying to retake the market share they lost last year. Congestion may also become a problem as demand levels creep back towards 2017's record high of 50.6 million mt/year.

BIMCO, CLIA, the International Chamber of Shipping, the World Shipping Council and others made the call in a joint statement on Wednesday.

The bank's report, titled 'The Potential of Zero-Carbon Bunker Fuels in Developing Countries', analyses the prospects of biofuels, hydrogen, ammonia and synthetic carbon-based fuels in the future of the marine fuels industry.