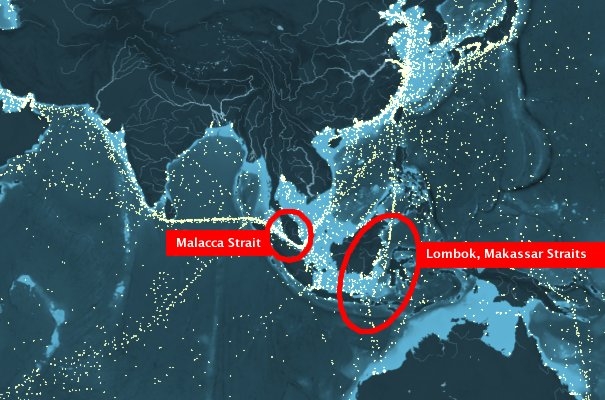 The Lombok and Makassar straits could take over from the Strait of Malacca as the world's main shipping route, Rizal Ramli, Coordinating Minister for Maritime Affairs and Natural Resources in Indonesia told local media on Monday.

With the world's biggest bunkering port, Singapore, located in the Strait of Malacca, such a shift could also have a significant impact on world bunker markets.

Explaining that the Strait of Malacca is too narrow, has become too busy, and is getting shallower, he says the number of vessels and risk of collisions is growing in the passage every year, while in contrast the Lombok and Makassar straits would be better suited to accommodate increasing shipping traffic.

"The lane is deeper and wider that there would be less risk of sea accidents and damage to the environment from oil spill," said Ramli.

"We want to encourage more ships to take the lane," he added, noting that some large vessels already route through the Lombok and Makassar straits.

Ramli says increased traffic through the alternate shipping route would be beneficial to Indonesia, and would require the development of supporting infrastructure and businesses, particularly in eastern Indonesia.

"We need to lobby big players in global shipping industry such as Greece , Norway, and Denmark," added Ramli, noting that he recently met with Greek shipping players.

Singapore, meanwhile, is currently enjoying its best ever bunker sales volumes, with the latest preliminary data from the Maritime and Port Authority of Singapore (MPA) showing May was its highest ever monthly sales total ever.

Ibia and other industry bodies say the issue should be discussed at the IMO.

The ship will be able to run on green ammonia for 3,000 hours per year after the system is installed.