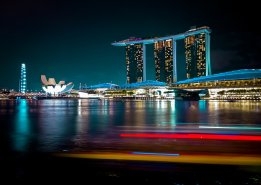 Sales of bunker fuel in Singapore in September were up compared to the same month last year.

Volumes in the southeast Asian bunkering hub climbed by over 300,000 metric tonnes for the period, according to the latest figures from the Maritime and Port Authority of Singapore.

September's monthly figure is the third highest so far this year.

The organisation is inviting proposals to 'define the safety and operations envelopes to enable ammonia bunkering pilots'.