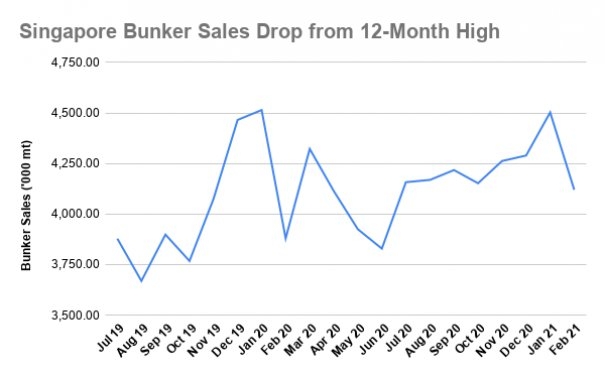 Last month's total was down from January but still significantly higher than the total a year ago. Image Credit: Ship & Bunker / Data Credit: MPA

Bunker sales in Singapore, the world's largest marine fuels hub, jumped by 6.2% on a yearly basis in February but declined from January's 12-month high.

The city-state's total sales reached 4.12 million mt in February, according to preliminary data from the Maritime and Port Authority (MPA), 6.2% higher than February 2020's level but 8.5% lower than the 12-month high of 4.5 million mt reached in January 2021.

February 2020's volumes level may have been slightly depressed as shipping companies started to use the VLSFO stockpiles they built up before the IMO 2020 transition rather than making new purchases.

The mandatory mass flow meters used to measure all bunker deliveries in Singapore come with a +/-0.5% margin of error, while remaining more accurate than traditional measurement systems used at most other ports.

Singapore's rise last year -- gaining by 5%, its biggest yearly advance since 2016 -- made it one of the best-performing hubs, and compared with a rise measured in metric tonnes of 2.8% at Rotterdam, and a drop of 11.4% for Panama.

The number of ships calling at Singapore for bunkers in February advanced by 1.6% on the year to 3,240 vessels. That left the average stem size 4.5% up on the year at about 1,272 mt. 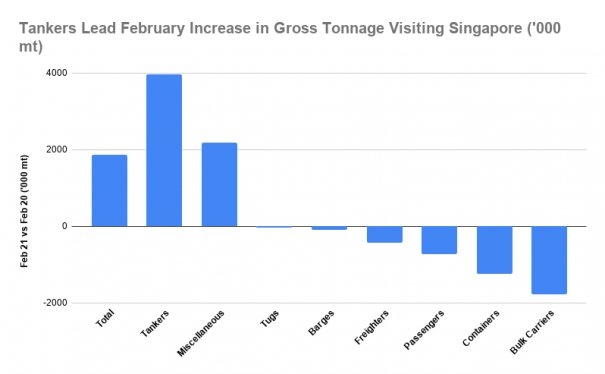 That advance came with an increase in tankers visiting Singapore.

Meanwhile HSFO sales surged by 62.6% to 1 million mt, taking HSFO's share of the total market to 24.3% last month compared with 16% a year earlier.

Over the next six months to September 2021, Toyota will test technical properties of biofuels including oxidation and storage stability and emissions.