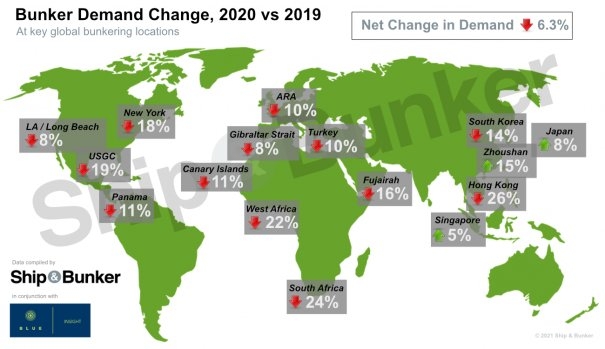 Demand at key marine fuel hubs dropped by just over 6% in 2020 compared to 2019, according to a market survey of bunker sales volumes in 16 leading global bunkering locations

As in previous quarters, Ship & Bunker in conjunction with consultancy BLUE Insight, surveyed bunker market participants around the world alongside official data where available and found an average drop of 8.1% in the fourth quarter from the same period of 2019. While this overall decline was slightly greater in percentage terms than the 7.9% drop witnessed in Q3, absolute volumes rose 4.1% sequentially to 31.8 million mt in Q4 compared to the 30.5 million mt sold across the 16 hubs in Q3.

As the recovery from the COVID-19 crisis gathered pace over the final quarter of the year, most all of the markets that saw sales decline in Q3 recorded an improvement in sales. But the two markets making big gains in Q3 - Singapore and Zhoushan with year-over-year gains of 10% and 43% respectively - in Q4 saw those gains paired to 5% and 15% respectively.

"Readers should keep in mind that as unusual as 2020 demand has been, 2019 was unique in its own right thanks to the run up to the IMO 2020 rule. This was particularly so in forth quarter of 2019 as most vessels prepared to burn 0.50% sulfur fuels from January 1, 2020," said Ship & Bunker Managing Director, Martyn Lasek.

For 2020 as a whole, overall demand declined by 6.3%, with volumes essentially flat in the first quarter followed by losses of 9.3%, 7.9% and 8.1%, respectively, in the following three. However, it is worth noting that the cruise industry was brought to a virtual standstill in 2020. That sector alone represents around 4% of global demand.

"What comes immediately to mind is that it could all have been a lot worse," commented Adrian Tolson, director of BLUE Insight.

"From the dark days of April and May came a moderate demand recovery even through the Northern Hemisphere lockdowns later in 2020. Port demand damage fluctuated along with regional Covid outbreaks and also as impacts rotated between different shipping sectors.

"Cruise ships took the earliest hit with practically no bunker activity in 2020. Containers quickly followed as supply chains fell apart and consumer demand became erratic, recovering as the year progressed to setting cargo (and possibly bunker) records in some major ports.  Dry Bulk and Tankers, both initially resilient, eventually had to deal with the impact of reduced demand for raw materials and a shrinking global economy."

Together these areas saw just over 126 million mt of demand in 2020, meaning they cover around half of current global demand.

But because the areas covered by the survey include some of the top bunkering areas in the world, the global drop shown is likely to be less steep than that seen for total demand. The effect of demand tending to congregate at bunkering hubs last year has left the world's smaller ports with sharper declines.

The full breakdown of the survey results including sales volumes in each bunkering region for Q4 2019, Q4 2020 and 2019 and 2020 as a whole is available by clicking here.

Strength in bunker volumes at Asian ports was a consistent theme of 2020, with three of the Asian areas covered in this survey showing overall growth last year despite the global economic crisis.

Singapore, Zhoushan and Japan all saw growth both in the fourth quarter and 2020 as a whole.

What was also worth noting was that at the end of Q4, we also saw Far East Russia basically re-entering the market after some months of low availability out there

"For the full year 2020 some regions exploded in volume, and in other regions it dropped like a stone," Claus Bulch Klausen, head of operations at Dan-Bunkering, told Ship & Bunker on Friday.

"In Q4 we saw continued strong demand in Asia and especially China.

"What was also worth noting was that at the end of Q4, we also saw Far East Russia basically re-entering the market after some months of low availability out there.

"That market is moving a bit again and it seems to continue into 2021.

"During 2020 Japan has also seen quite an increase in volume, to some degree at the cost of the Pacific Northwest. This might be shifting back again now."

Hong Kong remained the main exception to Asia's gains, with tough COVID-19 containment measures taking away much of the market for bunker-only calls and leaving the market there with declines both in the fourth quarter and the whole year.

The measures required vessels arriving at Hong Kong for bunker-only calls to quarantine for 14 days before receiving their fuel, driving much of this demand to other ports in Asia. Much of Zhoushan's Q4 10% gain on the year is likely to have come from this move, as well as some of Singapore's 3% rise.

For most of the rest of the world, the slump relating to COVID-19's effect on the shipping industry remained the biggest factor in the market at the end of last year.

But as we head into 2021, oil prices have started to pick up, shipping activity is increasingly moving past the lows of the COVID-19 and bunker volumes may soon start to approach their pre-2020 levels.

"At the end of February and the beginning of March, it seems there is a bit of a pick-up in volumes that are more evenly spread out geographically," Dan-Bunkering's Claus Klausen said.

Presumably of some worry to market participants is that the demand recovery does not yet seem to be translating into margin recovery. Suppliers in many markets are reporting increased competition and tighter margins even as their demand levels return to normal.

But as vaccination efforts begin to ease COVID's grip on the global economy, if nothing else the year ahead is likely to give us a much better idea of what the post-IMO 2020 markets will be really like.

"2021 has a much more positive note, a return to normal, but likely not immediately," said Tolson.

"Some supply locations will deal with continuing impacts for the rest of 2021 and some may never recover some of that last bunker demand - a global economic shock in combination with the eclipsed IMO 2020 transition has almost certainly changed some of the balance of power in the worlds bunkering ports."

About 3% of the samples VPS received last year were found to be non-compliant on sulfur levels, and this rate has risen to about 7% so far in 2021.