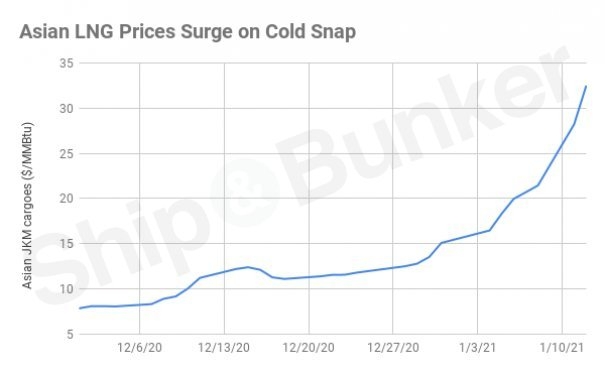 Shipowners considering a switch to gas power should take note of record-high LNG prices at the start of this year.

A cold snap in Asia has hiked demand, driving prices up to the highest level on record. Price reporting agency S&P Global Platts assessed Asian spot LNG at $32.494/MMBtu on Tuesday, the highest level since the quote was launched in 2009.

The price assessment gained 31% in a single day on Monday, and has more than doubled since the end of 2019.

At current price levels, buyers would need to buy in excess of $1500 of LNG to get the energy equivalent of one tonne of VLSFO, which is currently priced around $450/mt in major bunkering hubs.

Buyers should also be aware of some significant regional variances, and in particular prices are much lower and more stable in the producing markets

"Prompt prices have disconnected from conventional price anchors to reach levels well above the mark required to economically incentivize all flexible supplies to the APAC region, including US exports via the Cape of Good Hope and European reloads," Chris Durman, global head of LNG analytics at Platts, said in an emailed statement this week.

"With very limited spot shipping availability and Asia Pacific supply and demand somewhat insensitive to short-term price signals, this has led to a relatively open-ended ceiling for the spot market in its search for a marginal cargo with freight rates eclipsing $200,000 per day."

This rapid jump in LNG prices could be seen as a warning for those eyeing a shift towards gas-powered shipping. The price environment for LNG has been highly favourable to buyers in the past couple of years as LNG bunkering has rapidly risen up the agenda -- in May the Platts JKM price hit an all-time low of $1.825/MMBtu.

The good news is that the reality for LNG bunker buyers is that the pricing jump will not be quite as severe. As most LNG bunker supply is currently carried out on term contract, LNG buyers in shipping will not currently be feeling the brunt of the recent price rise.

However, such issues may well come into effect in later contract negotiations. And as LNG bunkering matures and becomes more widespread, spot trades may become much more common and short-term volatility like that seen this year become much more noticeable.

Buyers should also be aware of some significant regional variances, and in particular prices are much lower and more stable in the producing markets.

For example, Ship & Bunker pricing indicates VLSFO in Vancouver, Canada is currently around $438/mt but the energy equivalent volume of LNG bunkers in the port would cost just $300 - $315. Those LNG bunker prices are issued on a monthly basis and are linked to the Sumas natural gas price.

VLSFO in ARA, meanwhile, is currently priced around $420/mt while Titan LNG this week is indicating the energy equivalent volume of LNG bunkers delivered by barge would cost $403 to $423. Titan says its prices are based on a "longer contractual obligation" and "may not entirely reflect spot market."

Still, a regular winter spike in bunker prices may be something owners of gas-powered tonnage have to plan for in future.

"The current seasonal LNG spikes in some regions I don't think changes anything with respect to the overall LNG bunker proposition," Adrian Tolson, director of BLUE Insight, told Ship & Bunker.

"But what it does highlight is that LNG is perhaps still not ready to be a prime time marine fuel being lifted in the spot market."

Tue Jensen has joined the firm as head of risk in Copenhagen as of this month.

The company is looking for candidates with a degree and fluent English.