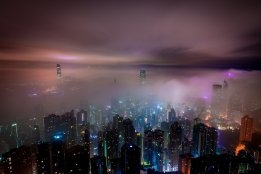 The auditors of Hong Kong-listed bunker supplier NewOcean Energy have resigned over delays to the review of the firm's 2020 results caused by outstanding documents.

Accountancy company Deloitte stepped down as NewOcean's auditor as of April 29, the bunker supplier said in a statement on its website last week.

"The circumstances leading to the resignation of Deloitte, as stated in their resignation letter, are the significant supporting documents and information outstanding, causing delay in the audit progress for the audit of the Company's consolidation financial statements for the year ended 31 December 2020," NewOcean said in the statement.

The following are the particular pieces of outstanding information and documents, according to NewOcean:

"The business operations of the Group are located, apart from Hong Kong, in Mainland China, Macao, Malaysia and Singapore and the situation of significant documents and information outstanding is mainly a result of the lockdown in the above countries and regions due to the COVID-19 pandemic," NewOcean said.

"As there has been no tangible progress to date with respect to the outstanding documents and information and considering that Deloitte has been unable to reach a consensus with the Company on the estimated timetable to complete the audit, Deloitte tendered their resignation as auditor of the Company."

A new auditor, Crowe (HK) CPA Limited, has been appointed as of April 29. The release of the company's audited 2020 financial statement is likely to be delayed to the end of June as a result.

Last month the company said it was expecting to take a scaled-down role in the global bunker market from now on, including potentially selling off some of its barges, after last year's losses.

The company's X-Gas Project has developed a range of designs of medium-size bunker tankers.