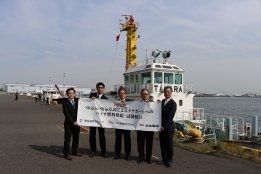 The fuel is being supplied by Toyotsu Energy Corporation, with the support of the Nagoya Port Authority. Image Credit: NYK

NYK subsidiary Sanyo Kaiji has launched a trial of biofuel bunkers in Japan.

The firm will be testing biofuels in tugboats in Japanese waters over the next three months, it said in a statement on its website on Tuesday. The oil is partly derived from used cooking oil collected from Toyota Group and Toyota Tsusho Group companies, and will be delivered by barge.

The fuel is being supplied by Toyotsu Energy Corporation, with the support of the Nagoya Port Authority.

"This is an initiative that contributes to a circular economy by building a supply chain through local production and local consumption," NYK said in the statement.

"NYK Line and Sanyo Kaiji will promote the use of environment-friendly fuels such as biofuels and contribute to the realization of a carbon-free society."

The firm will test a biofuel blend on board its managed VLCC the Apollonas.

The system was created as part of the FreeCO2ast project seeking to develop a hydrogen energy system for two coastal cruise vessels owned by Norway's Havila Kystruten.

The clean-up operation after the spill has now concluded.