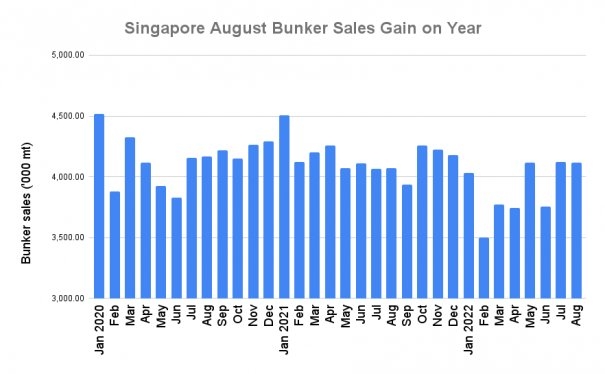 Bunker demand in Singapore, the world's largest marine fuels hub, saw a modest gain on a yearly basis in August but slipped from July's seven-month high.

The average stem size last month was about 1,282 mt.

The city-state's total demand reached to 4.1 million mt in August, according to preliminary data from the Maritime and Port Authority. The total was up by 1.1% from the same month a year earlier, but down by 0.1% from July's level.

The total had risen by 1.4% on a monthly basis in July.

HSFO's share of the total was 29.9%, up from 25.9% the same month a year earlier. Its monthly total came off slightly from the highest level since the pre-IMO 2020 era seen in July, having dropped in recent months after HSFO contamination problems seen in February and March.

The niche LNG bunker market in Singapore continues to grow, after seeing total sales of 50,000 mt last year, but LNG sales are not yet being included in the monthly figures. Biofuel sales are also being carried out, but are not included in the official data.

Strong Start to Second Half

August's total shows the strong start to the second half of the year seen in July's numbers continue, without advancing further, after persistent weakness early in 2022. Singapore's first-half total was the lowest since the first half of 2015, undermined by COVID lockdown effects in Asia, the HSFO contamination problem in February and March and supply issues caused by the Russia-Ukraine crisis.

There were 3,212 vessel calls for bunkers in August, 1% higher than the level seen a month earlier and the most since July 2021. That left the average stem size last month at about 1,282 mt, compared with the 12-month average of 1,287 mt. 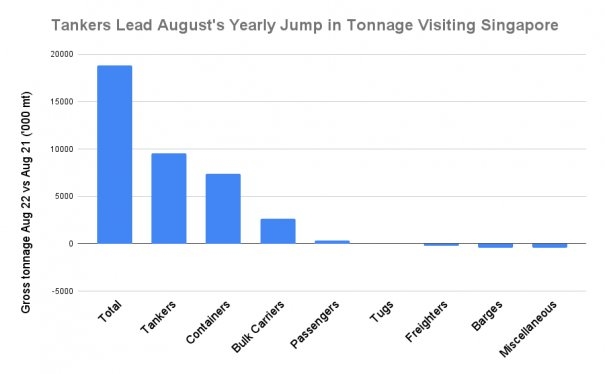