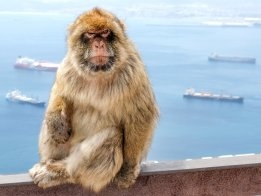 The number of cross-border sea incursions between Spain and Gibraltar differ sharply depending on which side is doing the recording.

The stark difference is down to the way London and Madrid define an incursion, according to a report by local news provider Gibraltar Chronicle.

Under the United Nations Convention on the Law of the Sea, vessels from other countries have the right to conduct innocent passage through the waters of another state.

That means sailing in transit at a steady speed and course.

For the UK, any deviation from that definition, no matter how slight, amounts to an unlawful incursion leading to a diplomatic protest. The UK monitors and challenges all incursions in British waters and airspace, and files protests with Spain.

The incursions, while a violation of British sovereignty, are not a threat to it and do not undermine the UK's position under international law, the report said.

Spain conceded Gibraltar to the UK under the treaty of Utrecht. However, the status of Gibraltar is the subject of dispute between the two European states.

The 110 m ro-ro vessel Minsheng was delivered to Minsheng Steamship Co. in China on June 21.