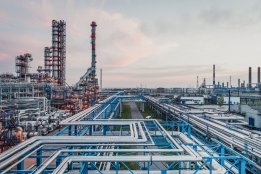 The company has installed 3.5 km of additional pipes at its Omsk refinery. Image Credit: Gazprom Neft

Russian oil producer Gazprom Neft has increased its production of very low sulfur fuel oil (VLSFO) with the installation of more pipelines at its Omsk refinery.

After the installation of 3.5 kilometers of pipes around the refinery complex to deliver fuels and blending components, the company has now expanded its production of low-sulfur bunker fuels, it said in a statement on its website Monday.

Gazprom Neft now plans to produce more than 1.5 million mt/year of low-sulfur fuels for the domestic market, the company said, including both VLSFO and ultra low sulfur fuel oil (ULSFO) for use in emission control areas.

Offline capacity reached 1.02 million TEU by 21 February, the highest level since Alphaliner started measuring the data at the start of last year.