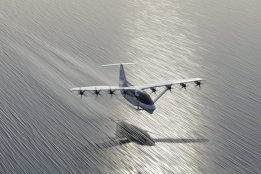 The seagliders could cover the voyage from Portsmouth to Cherbourg in 40 minutes. Image Credit: Brittany Ferries

Brittany Ferries is considering using a new type of battery-powered 'flying ferry' to carry passengers across the English Channel.

The company has signed a letter of intent with Boston-based technology firm REGENT which could see it using the company's seagliders between the UK and France by 2028, it said in a statement on its website this week.

"Seagliders combine the convenience of passenger ferries with the comfort of hydrofoils, the aerodynamic efficiency of hovercraft and the speed of aircraft," the company said in the statement.

"With the potential to connect existing ferry ports, the craft are expected to fly at speeds of up to 180 mph – six times faster than conventional ferries – with a battery-powered range of 180 miles."

The seagliders could cover the voyage from Portsmouth to Cherbourg in 40 minutes.