EU Must Tax Emissions From Voyages Outside Europe: T&E 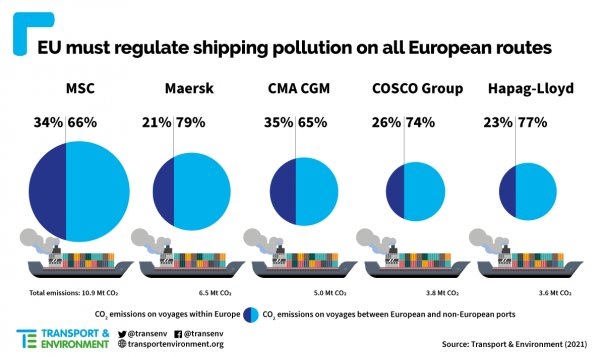 The bulk of the top five firms' emissions are coming from journeys between Europe and elsewhere. Image Credit: T&E

Environmental group T&E has argued the European Union must include voyages outside Europe in its new emissions trading system plans for shipping to be announced later this month.

The European Commission is imminently due to announce its plans for addressing the shipping industry's emissions, which are likely to include introducing shipping to its emissions trading system and mandating steadily reducing carbon intensity of marine fuels over the coming years.

But still up for debate is the extent to which journeys between European and non-European ports will be affected.

According to T&E's analysis, between 65% and 79% of the top five shipping companies' emissions are created on these voyages between Europe and elsewhere, the organisation said in an emailed statement on Tuesday.

"Anything less than a carbon market covering extra-European voyages lets the biggest shipping companies off the hook and leaves smaller operators who sail mainly within Europe to pick up the tab," Jacob Armstrong, sustainable shipping officer at T&E, said in the statement.

"It would also forfeit ETS revenues that could be reinvested in greening the sector."

One argument against this proposal would be that it could create the incentive for shipping firms to avoid European ports by bringing cargo from Asia to facilities just outside the EU.

The European Commission's announcement is expected on July 14.

The Dmitry Mendeleev has been delivered to Shturman Koshelev LLC, and will be chartered out to Gazpromneft Marine Bunker for LNG bunkering operations in the Baltic.

The firm's Containerised Energy Storage System (ESS) is housed in a 20-foot ISO container and can be integrated with a vessel's main power distribution system.