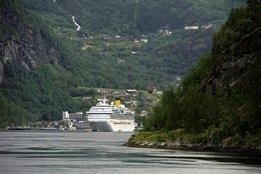 The Geirangerfjord is among the Norwegian fjords on the World Heritage List. Image Credit: Norwegian Maritime Authority / Sjøfartsdirektoratet

The Norwegian Maritime Authority (NMA) wants to create new emissions control areas (ECAs) where marine fuel is capped at 0.10% and scrubbers are banned.

In June this year the NMA proposed new legislation to tighten emissions rules in the Nærøyfjord, Aurlandsfjord, Geirangerfjord, Sunnylvsfjord and Tafjord.

Based on the comments received following the review period, NMA says it is now proposing the even stricter requirements for the new legislation. This has now been circulated for review over a six week period.

"The Government wishes to reduce the emissions and discharges from cruise ships. Stricter requirements for ships in the world heritage fjords would be a step in the right direction," says Minister of Climate and Environment, Ola Elvestuen.

For existing ECAs and the upcoming IMO 2020 rule, the use of scrubbers is permitted to enable vessels to achieve an equivalent route to compliance while continuing to burning otherwise noncompliant high sulfur bunkers.

But in the absence of a universally accepted scientific assessment of marine scrubbers' environmental performance, debate over their use has become increasingly heated.

NMA is clear its proposal covers all scrubbers, be they open, closed, or hybrid systems.

The company saw pre-tax profits of $13.5 million for the 2021/22 financial year, it said in an emailed statement on Monday, down from $19.5 million the previous year.