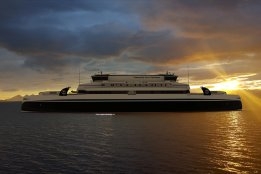 They are being designed by Norwegian Ship Design and plan to use a minimum of 85% 'green hydrogen' based fuel.

The ferries are scheduled to enter operation in October 2025.

As the global marine shipping industry looks to eliminate GHG emissions, hydrogen is one of the leading candidates to replace oil in the future marine fuels mix thanks to the fact it is a non-carbon energy carrier.

With the development and use of hydrogen-bunkers at an extremely early stage, projects such as Torghatten Nord's are of interest to a wide range of industry stakeholders - a point not lost on their CEO, Torkild Torkildsen.

"To develop hydrogen ferries on such a long and weather-exposed route is a world-class climate project with great importance for the entire maritime sector and not least Bodø and Lofoten," they said.

The vessel design features two main components on board the vessel; a hydrogen storage system that feeds fuel cells, and the fuel cells themselves, providing electric power for the propulsion and all other consumers on board.

"We have to think anew and find completely new solutions compared to what we know today as ordinary ships," said Gjermund Johannessen, CEO at Norwegian Ship Design.

"We have evaluated a number of different solutions for the onboard hydrogen system and has come up with a unique and safe concept that takes hydrogen's properties into account. What we are developing now will likely set the standard for an entire class of passenger ships powered by hydrogen."

The firm, with local subsidiary Heron Marine, is now offering marine fuel deliveries for all vessel types and sizes, both on ballast and laden, at Algoa Bay.

The strategy is due to be revised next year, and current indications are that the IMO's member states are likely to endorse a tougher set of targets, according to IBIA's Unni Einemo.