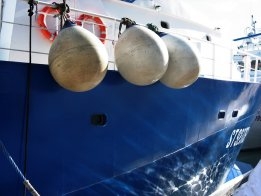 German researchers have found that antifouling coatings used to protect ships' hulls may be contributing to microplastic pollution at sea more than first thought.

The group measured the concentrations of 10 commonly used plastics in samples taken from surface waters across the German Bight – an area in the south-eastern corner of the North Sea, which hosts some of the world's busiest shipping lanes.

The findings from the University of Oldenburg team indicated that in part of the German Bight and attached estuaries, marine-based sources seem to outweigh by far land-based sources, according to science news provider Chemistry World.

The researchers found that up to 80% of the microplastic content could be attributed to polymers used as coating binders, rather than from solid plastics used in consumer goods.

Oil Back On Track As OPEC Predicts Second Half Consumption Surge