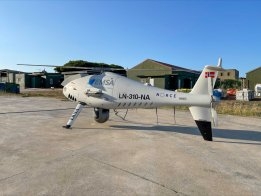 Drones, also known as remotely piloted aircraft systems (RPAS), are being used to detect sulfur emissions from shipping transiting the Strait of Gibraltar.

Ships plying the strait do so under the current 0.5% sulfur cap on bunker fuel.

The move is a joint effort by the European Maritime Safety Agency and Spain's ministry of transport and local marine administrations.

The RPAS can fly for over six hours and with range of more than 100 km.  Similar technology is used by the Danish authorities to monitor sulfur emissions from ships in the Baltic Sea.

The drone  (pictured) in use over the Gibraltar Strait is owned by the Nordic Unmanned, Norce, UMS Skeldar consortium.

In 2021 of the samples sent to the company just 4% of the VLSFOs were off-specification on at least one property.

The company has extended the Monjasa Oil & Shipping Trainee programme to cover all of its offices this year.

To look at methanol for use in marine and transport sectors.