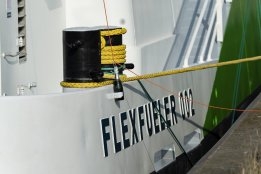 The FlexFueler 002 is jointly owned by Titan and Fluxys and will be used to supply LNG as a marine fuel throughout Antwerp and the Western Scheldt, the Port of Antwerp said in a statement on its website.

Titan also operates the FlexFueler 001 and the Green Zeebrugge in Northwest Europe, and plans to have the largest network of LNG bunkering vessels in Europe by 2025.

"We are committed to playing a pioneering role in the integration of low- and zero-carbon fuels to the bunker market," Jacques Vandermeiren, CEO of the Port of Antwerp, said in the statement.

"The arrival of the FlexFueler 002 marks an important landmark in the transition to a multi fuel port.

"LNG as a marine fuel is now available throughout the port, enabling us to further facilitate the energy transition of shipping."

The vessel completed its sea trials in four days.

The Clean Shipping Alliance argues scrubber washwater should not be interpreted by the authorities as marine pollution.