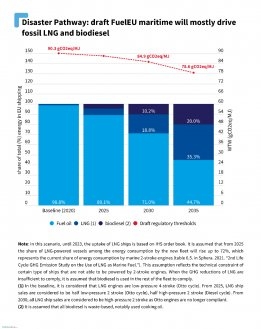 A leaked European Commission proposal to mandate steadily declining carbon intensity of marine fuels used in Europe over the coming decades could drive LNG to more than 35% of bunker demand, according to environmental group Transport & Environment (T&E).

The organisation has seen a leaked copy of a draft European Commission proposal aimed at increasing the use of low and zero-carbon fuels in shipping. The draft suggests mandating the following greenhouse gas intensity cuts from 2020's level for marine fuels, according to T&E's copy:

The effect of introducing such a law without banning the use of fossil LNG would be to boost the use of LNG in shipping, T&E said in an emailed statement on Wednesday. LNG bunker demand could reach 18.8% of the total by 2030 and 35.3% by 2035, according to the organisation's research.

"This supposedly green fuels law would push the cheapest alternatives, which are also the most destructive," Faig Abbasov, shipping programme director at T&E, said in the statement.

"Counting fossil gas and biofuels as green will lock shipping into decades of further pollution while we should be promoting renewable hydrogen and ammonia.

The European Commission is expected to announce its plans for shipping next month.

The firm has now completed a test of its bioMSAR product on a medium-speed Wärtsilä diesel engine at the VTT facility in Finland.

Evergreen Marine's new 23,992 TEU boxship the EVER ACE has taken over as the world's largest.

The firm has signed a deal committing REIntegrate and European Energy to establishing a plant in Denmark producing the 10,000 mt/year of green methanol that Maersk's new ship will require.