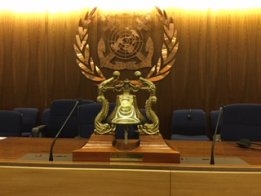 While welcoming the International Maritime Organisation's approval of the report of the technical working group to set up 0.1% sulfur limit on bunker fuel used by shipping in the Mediterranean (MedSECA), green lobbyist Nabu would like to see a limit on nitrogen dioxide (MedNECA) in place by 2027.

"In order to designate the Mediterranean a NECA by 2027 a submission to the IMO is needed as soon as possible," according to Nabu..

The MedSECA has gone for adoption by the IMO's environmental committee (MEPC79) in December with the prospect of it coming into force in 2025.

A 0.1% sulfur limit on bunker fuel has been in place in all European Union ports since 2012 and SECAs operate in the North and Baltic seas.

However, signs of demand destruction are equally compelling.