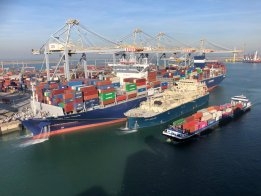 Demand for LNG as a bunker fuel in Northwest Europe is set to surge in the final two months of 2020 with the arrival of two gas-fuelled boxships run by France's CMA CGM.

The CMA CGM TENERE took on its first LNG bunkers at Rotterdam last week, according to a statement on the French liner's website. Energy company Total supplied 12,000 m3 of its natural gas, while the ship carried out cargo operations concurrently.

The CMA CGM TENERE is the first in a series of six 15,000 TEU ships the liner is chartering to use between Asia and Europe. The ships will be delivered between now and the end of 2022.

And on November 12 the company is planning to bunker the CMA CGM JACQUES SAADE, the first of its nine new 23,000 TEU gas-powered ships.

"LNG is currently the industry's best method for preserving air quality," the company said in the statement.

"It exceeds current regulatory requirements, cutting emissions of sulfur oxides and fine particles by 99% and of nitrogen oxides by 85%.

"LNG also provides an initial response to the challenge of tackling climate change."

Greece's government has recently called for the establishment of an EU Research Centre for Alternative Marine Fuels and Technologies.