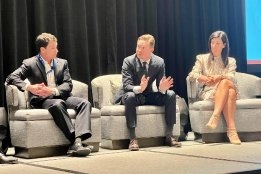 A previous link between strength in diesel crack spreads and VLSFO strength appears to have been broken this year, Marc Holm, senior fuel oil trader at Hartree, said at the IBIA Annual Convention 2022 in Houston last week.

"In the past -- of course VLSFO is a young market -- we've seen VLSFO get supported whenever gasoline cracks and disti cracks were stronger, but we're actually seeing the opposite now," Hom said in a panel session at the conference.

"In Europe, when you look over the last ten years the refining margin has been crap -- on average it's a horrible business to be in -- but this year's been great, all because of distillates.

"So they're all maxing their runs to make that distillate, and then every other product becomes residual.

"That's why you see now 0.5% being discounted versus Brent, which we've not seen before; they don't mind that they're long VLSFO, as long as they make that incremental distillate molecule."

Singapore VLSFO Drops to Lowest Level Since Start of 2022

VLSFO delivered in Singapore hit the lowest price level since January 7 on Monday.

Nimofast Brasil has signed a deal to offer LNG bunkering, small- and medium-scale LNG shipping and small-scale floating storage units in Brazil from 2025.