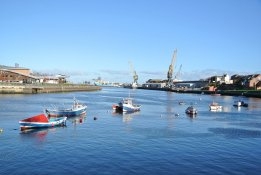 Two of the ships were arrested at Sunderland. File Image / Pixabay

Three ships were arrested in the UK in July after failing port state control inspections.

The first, the 2,800 DWT general cargo vessel Meric, was arrested at Sunderland on July 5 with 22 deficiencies found, of which one was considered grounds for detention, the Maritime and Coastguard Agency (MCA) said in a statement on its website last week. The ship was released again on July 10.

The second, the 14,000 DWT bulk carrier Serdika, was arrested at Sunderland on July 20 with 22 deficiencies, including two grounds for detention. The ship was still detained as of July 31.

The third, the 3,700 DWT general cargo vessel Elke, was arrested at Scunthorpe on July 20 with 21 deficiencies, including one considered grounds for detention. The ship was released on July 23.

Four other vessels detained in previous months remained under arrest in UK waters, according to the MCA: the Sirius 2, the Poseidon, the Tecoil Polaris and the Cien Porciento.