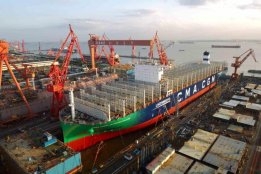 This year will see container lines ordering some more of the largest types of ship in the world -- providing a key test of the momentum behind the growing LNG bunker industry.

A series of companies has put in giant boxship orders over the past six months, with more expected this year.

Hong Kong's OOCL kicked this year's deals off last week with its order of five new 23,000 twenty-foot equivalent unit (TEU) container ships, to be among the largest in the world upon their delivery from 2023.

The company has considered LNG as a fuel and may yet decide to install scrubbers, a spokeswoman told Ship & Bunker last week, but its assumption is that it won't be deviating from mainstream bunker fuels.

"The base case is that we will simply use VLSFO," she said.

The order followed similar ones by MSC and Evergreen in October and November of last year, respectively.

Hapag-Lloyd is expected to follow suit with an order of six vessels of similar size this year.

At present, all of these orders look likely to leave as an anomaly CMA CGM's order of nine ultra large container ships fuelled by LNG in 2017.

The French container line's order two years ago was accompanied by a strategic agreement with Total to supply the ships with 300,000 mt of LNG per year for a decade from a new barge.

That order was a significant boost to the nascent LNG bunkering industry, taken as evidence that it could be made to work for some of the largest ships in the world, with suppliers keen to make it happen.

The test in 2020 is whether any more container lines can be persuaded to join the French container line in its order -- and the key question is, if not now, when?

The test in 2020 is whether any more container lines can be persuaded to join the French container line in its order -- and the key question is, if not now, when?

The arguments for LNG propulsion are arguably stronger now than they're likely to be in a few years time.

An LNG-fuelled ship ordered today is likely to see fuel prices at the start of its life near record lows, and can be made with fuel efficiency measures in mind to meeting the IMO 2030 target on carbon dioxide emissions reduction.

It could then have a commercial life of more than 25 years and no longer be in service by the time the IMO 2050 target is in effect, in case LNG proves not to be the mainstream propulsion option after then.

These arguments will be steadily less strong as the next few years go by.

If a series of container liners proceed to ignore LNG for now, it could have the opposite effect to that of the CMA CGM order two years ago.

If a series of container lines proceed to ignore LNG for now, it could have the opposite effect to that of the CMA CGM order two years ago, persuading more companies to hold off on LNG until the arguments over its status as a low-carbon fuel look more settled.

That would leave the current shipping companies with LNG-fuelled tonnage having to sustain the current high LNG infrastructure costs themselves for longer as assets go unnderused, weakening the economic case.

The current record low LNG prices and slow progress in other carbon-saving methods should be making a good case for gas-fuelled shipping -- but if some more shipping companies are not won over this year, the LNG bunker industry may struggle to gain traction in the years beyond.

Bunker demand in Singapore has seen a small decline for the second month in a row.