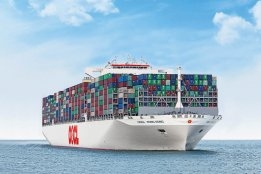 The OOCL Hong Kong will soon no longer be among the largest ships the company owns. Image Credit: OOCL

The vessels will have a cargo capacity of 23,000 twenty-foot equivalent units (TEU), bigger than any boxships on the water today and making them still among the largest upon their delivery.

The ships are due for delivery from 2023 and will operate on the Asia-Europe trade, OOCL said.

Over the next five years the company plans to dispose of 13 vessels from its fleet, totalling about 76,000 TEU of capacity.

The company had originally planned to make this order earlier after its previous order in March 2015, it said.

The announcement makes no mention of the propulsion system for the new vessels beyond calling them "fuel-efficient", making it likely the ships will be run on conventional bunker fuels rather than LNG.

A spokesman for OOCL was not immediately available to comment on the propulsion system.

Corvus will supply a 1,500 kWh battery pack that will reduce the vessel's fuel consumption by about 20%.