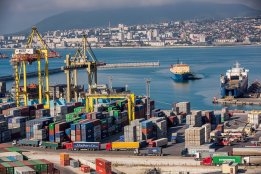 Shipments of CPC crude from the Russian Black Sea port of Novorossiysk have been halted after storm damage.

Kazakhstan has stopped CPC loadings from the port, price reporting agency S&P Global Commodity Insights reported on Wednesday, citing comments from the operator of the pipeline taking its crude there.

Repairs allowing the loadings to resume may also be hampered by the war in Ukraine, with some plants suppliers now refusing to deal with the company, according to the report.

CPC crude exports were more than 1.5 million b/d in February.

Kazakhstan is now considering alternative routes for its oil exports. This may include using a pipeline to Ceyhan and loading shipments from there, using Russia's Transneft pipeline network or a pipeline from the Caspian to China.

The firm is looking for candidates with fluent English and preferably German, and possibly experience in a bank or corporate treasury function.

The webinar will focus on the new edition of the two bodies' Shipmaster's Bunkering Manual, published in October.