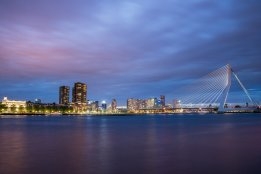 Declining global demand for fuel oil because of IMO 2020 helped bring about a small decline in liquid bulk throughput at the Port of Rotterdam last year.

This was despite a 3.9% jump in crude oil throughput, the organisation said.

"The throughput of mineral oil products fell as a result of lower imports and exports of fuel oil," the port authority said in a statement on its website.

"This downward trend over the past few years intensified in 2019 as a result of tightened global emission regulations for shipping that came into effect on 1 January 2020."

In the past Rotterdam was a key location for the building of fuel oil cargoes, both from local product and Russian exports, mostly for shipment to Singapore.

While these shipments continue, the total volume is now much lower than in previous years.

Meanwhile container throughput at the port jumped by 2.1% to 14.8 million twenty-foot equivalent units (TEU) over the whole of 2019, the port authority said, despite "almost negligible" growth in the second half of the year.

Running lower-viscosity fuels constantly may be causing engine problems for some older ships.