If Clients Have Climate Ambitions, the Market is Ready: Jan De Nul 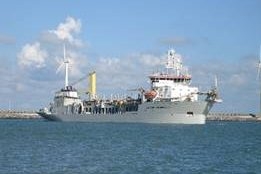 Jan De Nul Group has upped its pledge to use renewable biofuel bunkers, and says its trailing suction hopper dredger Alexander von Humboldt will now only sail on the renewable fuel.

"With this we want to prove to the governments and to our clients in the Benelux that if they have climate ambitions and incorporate these in the selection procedures, the market is ready for it now," says Bart Praet, Head of the Dredging Benelux department at Jan De Nul Group.

The fuel used by Jan De Nul is supplied by GoodFuels and is certified as a 100% renewable fuel.

One of the main barriers to using such biofuel has been its often healthy premium to traditional fuels.

While Ship & Bunker sources indicate this cost is coming down, differing regional incentive schemes are among the factors that make it difficult to make broad comparisons to traditional bunkers.

"We do whatever it takes to be as cost competitive with fossil fuels as much as we can – helped by ever improving government incentive schemes in Europe, Canada & West Coast USA," GoodFuels CEO, Dirk Kronemeijer, told Ship & Bunker.

But increased cost does not mean the use biofuel necessarily comes with an economic penalty; with governments and business leaders increasingly pressed to make climate sensitive business decisions the use of biofuel can in fact be a plus.

The Flemish government, for instance, says it "will definitely include a sustainability criterion for the next procurement of the dredging contract for the evaluation of offers".

IMO Secretary General to Consider How to Hold Digital-Only Meetings

Several meetings scheduled to be held at the IMO's London headquarters over the past month have been postponed.