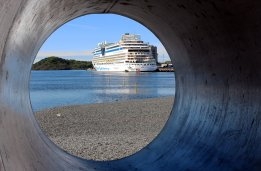 Plans for a large-scale ammonia plant in Norway has attracted more players.

As well as maritime, Yara International, Statkraft and Aker Horizons have agreed that the project will look at supplying "green hydrogen and green ammonia" to the agricultural sector and for industrial applications.

Uner the agreement, Yara's existing ammonia facility in Porsgrunn will be electrified, the company said.

Yara is already a player in the ammonia field while Statkraft and Aker Horizons bring expertise in "renewable electicity, power markets and industrial development", the firm's president and chief executive Svein Holsether said.

Last week's announcement widens the scope of the project.

Engineering consultancy DHI has prepared a report on 'ecotoxicity testing and risk assessment of washwater from open-loop scrubbers' on behalf of the EGCSA.